Vice City River is an ephemeral stream that flows through several districts in Grand Theft Auto: Vice City. The river has developed into a cultic mythical location over the years.

The river is situated in the eastern region of the city, it flows through Washington Beach, Leaf Links, and Vice Point. A large amount of scaled-down bridges interconnect these regions, divided by the river. However, it flows into numerous regions, including the waters between Downtown and Leaf Links, and between Washington Beach and Starfish Island. The main source of the river is the western sea itself. A major portion of the stream passes through Vice Point. The river has been home to some vintage aquatic myths, such as the Sea Monster and Megalodon Shark. Moreover, the Bridge Troll myth has also originated from the same region. 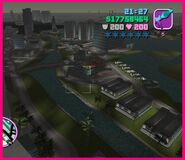