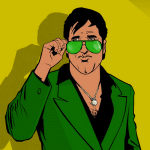 Hi! I'm GTA VC, SA, IV and V myth hunter. I made a few theories and findings around those four games. I am also a map deisgner here, so if you want any map of any GTA game edited, feel free to contact me.

Detailed Story of Findings and Theories

My Vice City myth hunting started off in February 2017, when I got to know about Norse Mythology. I made some more research and documented it on the pages. Two months later, I found a car, which was strangely reversing. However, it happened at the same spot, so I dismissed it as a simple spawn glitch. Few weeks later, I found a strange thing around Secret Room in 10th Anniversary Edition, which was just a simple texturing glitch. Few days later, I have heard a strange Mario dialogue, which could be related to Ricardo Diaz's Grave. It was co-investigated with AndreyFD. In January 2018, I have concluded a theory about the Psycho Killer. Also, in February 2018, I went onto an VC-MP investigation with the legend of VC myth hunting. There, we found a few myths, such as The Darkness of Little Haiti. He also told me about the Epsilon Program's presence in the game. After that, I did some research and documented it on a page. Later, I found out about a yet another nexus in the game. Same as with the Norse Mythology, I documented all findings on articles. Parallel to that, I found a strange texture belonging to the Prawn Island area, but nowhere to be found in the game. As of May 2018, I've found references to the Crystal Lake and Jason's Mother in VC. Both of these were hidden in Knife After Dark and Twilight Knife

The myth hunting adventure around San Andreas started in June 2016, when I made a theory about Mass Grave and Giorgio Forelli. I connected Giorgio to the grave, giving some arguments, such as the presence of Ken Rosenberg, Forelli's lawyer, in both VC and SA. However, it was not until February 2017, when I started to investigate the game, thus finding a glitch in the game. Almost a year passed, until I decided to investigate the game one more time, finding a strange shadow hiding underneath the ground, most likely being a part of a bigger mystery with an answer yet to be found. At the end of February 2018, I have posted my theory about CJ's Father. Few days later, in the early March 2018, I went on to create Grand Theft Auto: White Andreas. It is a big project, which would help Myth Hunters in finding dark creatures hidden in the countryside, by changing all the textures to white, making a contrast between the dark creature and the bright surroundings. However, during the process, I have found a strange bin texture, which may be linked to Epsilon Program, The Truth, and 69.

It was in August 2015, when I started my whole GTA myth hunting adventure. GTA IV was the first game I myth hunted in, with the Spy Helicopters being the first myth I video investigated. It poorly showed that the helicopters are controlled by the cops. However, I didn't know of the aspects of Video Editor back then, so I couldn't zoom into the pilot. After a lot of time, in January 2017, I have posted my findings according Spy Helicopters in IV. I don't think they were accepted as being pivotal, but I hope they are a clue to solve this puzzling mystery. As of late March 2018, I began my work on the Subway project, documenting every known sighting of the Ratman. In the April, I found the truth about The Stairs and debunked the myth. Later that month, I found a reference to the Hope Diamond in GTA IV.

As of May 2017, I have gotten myself a decent PC, thus allowing me to myth hunt in GTA V. There, I made some investigations (listed below) and put them on YouTube. In March 2018, influenced by no one other than the world famous Gunshow, I decided to go and investigate around Devin Weston's mansion. There, I found a strange grave-like site and some people relaxing in the sun.

What to say, huh? I'm just a simple boy with a driving license, nothing more. Or am I?

HIGH CANCER THREAT, EXPAND AT YOUR OWN RISK

I try to be a true slav! I hope for success blin! And remember! If you don't eat mayonnjiez, you don't like KOMPOT blin, you play S.T.A.L.K.E.R on difficulty lower than "Master," you don't cheeki breeki and your heels aren't touching the ground when you are squatting, so then иди нахуй western spy! I am also spreading the word of CHEEKI BREEKI, but when I tried to do it there, one Admin closed my thread about it!

I have my own Sandbox, where I test things out. I test text, templates etc.

Pages I have created

As I dislike the version without "The" on the front, this one suits perfectly.

Just a shortcut of my full name.

Given by Andrey after I posted this thread about clickbait GTA V youtubers.

I hate it so much, please stop using it. Always add "The" in front of it.

Given by MHM, who is (according to himself) really smart. He gives best insults around here LMAO

Uhh, no intellectual would like being called a fan of a clickbait YouTuber, am I right?

EXTREME CANCER THREAT, EXPAND AT YOUR OWN RISK

Good guy, we went through so much together.

Cool guy, helped me and others in getting rid of a pest.

Made me some templates. Also a slav brother.

Maybe on the outside he doesn't seem cool, but this is all wrong, as he is very cool guy and you better not argue with me about that.

Myths and Legends in GTA SA

Well, considering GTA SA is my favorite game in the series, then why wouldn't it be here?

Honestly, I have put it here, just because I made some theory about it... lmao

Spent some hours around this myth, still didn't fully invesigate it.

Well, it is very mysterious and intriguing myth. Didn't actually give much interest in it, until it creeped me out.

I made a reeaal mess, it took me few minutes, before I cleaned it up

Xal adventures :D
Add a photo to this gallery 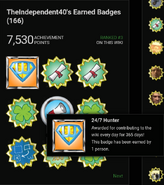 Please note, that I wrote '66 by mistake and it shall be '61, but all votes would be discarded

Retrieved from "https://gta-myths.fandom.com/wiki/User:TheIndependent40?oldid=139250"
Community content is available under CC-BY-SA unless otherwise noted.