Initially, the alleydoor1 in Little Haiti, leading to a basement was assumed to be just a door without any interior beyond. However, xNCx, a GTAForums user and a multiplayer beta tester discovered an interior hidden beyond the door.[1] The interior included a single machine for printing counterfeit money. Moreover, it was further discovered that some of the Counterfeiting Syndicate's pedestrians and Haitians roam around outside the basement. Pedestrians can also be seen inside the print works itself, but is less common.

According to a theory, the basement, pedestrians, and the machine are a reference to an undercover illegal business, formed by the Counterfeit Syndicate or Haitians to keep their work in secrecy. The basement could've been owned by other gangs as well such as Cubans or even the newly formed Vercetti Gang. However, the inaccessibility of the interior in the final version of the game, speaks that Rockstar scrapped up the storyline, considering it to be unimportant for the finished product. 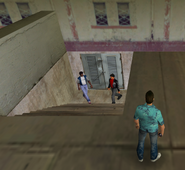 An example of pedestrians walking towards the exterior of the print works.

A rare occurrence where a pedestrian spawns inside the print works.