UNLIKELY (in physical form)
POSSIBLE (as an Easter Egg)

Shortly after the release of the game, UFO sightings began to escalate. It was later determined that players mistook aircraft contrails for UFOs. And the red lights in the night sky were navigation lights used by commercial planes. Moreover, Lunar UFOs have also been sighted in the city. They are also rumored to use the Interstellar Travel in the game.

The UFO at InterGlobal Studios, of undisclosed nature, is a bygone and thoroughly debated myth in Vice City. Apparently, It is a blue space saucer. The interior of the UFO is completely hollow. It could also be a movie prop, referencing UFOs. Players have speculated it to be used in some science documentary. Some have claimed that the UFO was used in the documentary featuring the First Moon Landing in 1969, it could’ve been used as a reference to the UFO’s sightings on the Moon. Several players have modified the UFO, enabling it to fly around the city. It is saved in the internal files as props_group1, dropping a bombshell on the thought of it being real. According to Grandtheftwiki, the UFO model is based on the one from the 1980 movie, Warum die ufos unseren salat klauen. [2]

Another strange feature can be observed in the Studio, used for the documentary on the 1969 Moon Landing. A strange Alien like figure texture can spot on the synthetic moon in the studio. It could be a reference to Buzz Aldrin’s and other astronaut’s confessions of spotting Alien beings on the Moon.

UFOs are also mentioned comically on the television show, Yuppie and the Alien broadcast in Vice City, featuring the lines:

On the radio station Wildstyle, the DJ will occasionally talk about aliens, but he is most likely talking about Yuppie and the Alien. Extraterrestrial beings are also ridiculed on VCPR. Martin Graves also mentioned Aztecs and UFOs during a conversation with Maurice Chavez, host of VCPR.

A user named Bermuda Triangle references UFO sightings from the 1970s, at liesdamnlies.net. It's likely that he is hinting the UFO sighting in GTA Vice City.

Aliens are mentioned on the cover of the Vice City Stories manual, known as The Vice City Inquirer. A redneck, who is represented by the artwork for character Marty-Jay Williams, can be seen holding a pistol and liquor. Apparently, he confesses that Aliens stole his brain and drank his liquor. This could be the cause of over-alcoholic consumption or hallucinations. It could also be one of Rockstar's humorous pranks.

The Alien-like creature on the synthetic moon.

The UFO prop in the internal files.

The cover of the Vice City Inquirer.

A modified UFO in Vice City. 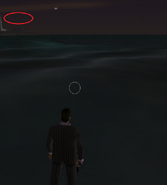