GTA Myths Wiki
Register
Don't have an account?
Sign In
Advertisement
in: Myths, Myths and Legends in GTA V, Alien Myths,
and 3 more

The UFO at Fort Zancudo is an Easter egg in Grand Theft Auto V. It is one of 4 other UFOs which can be found in the game.

At 3:00 AM, a strange green light forms a shape on top of a bunker within Fort Zancudo. Similar shapes may include the modeled UFO found out front of the Lil' Probe Inn in San Andreas and the one on top of Bishop's WTF?! building in Los Santos. This light is cast by a UFO that looks significantly different to the other UFO models on the map coming from its Plated & Stealth-Like Appearance, however, if the player looks up at the beam, it will disappear, and no UFO can be seen. Also, if the player uses a trainer to get to the top of the beam, they will see that the beam does not go high enough to reach the UFO. This UFO appears near the height limit above Fort Zancudo. It is invisible when the player is far away, and it seems to slowly fade into view when the player gets close to it.

This UFO looks very different in comparison with the other UFOs that can be found in the state. The design appears to be loosely based on the real world B-2 Spirit stealth bomber. It has a very thin, aggressive plated body style forming a rough, circular shape, and it has two large turbines rotating in opposite directions beneath the driver's compartment, which seemingly keep the UFO airborne. The UFO is completely matte black, in contrast with the other UFOs, which alternate between grey and silver. It appears to be a much more advanced aircraft than the other ones. Similar to the other flying UFOs, a strange electronic noise can be heard emanating from the aircraft when the player is close to it.

If the player attempts to fly an aircraft near the UFO, the UFO emits an EMP signal, which completely shuts down the vehicle that the player is in. The player can, however, parachute from an aircraft and descend very near the UFO, but if the player tries to land on it, he will be flung with great force in the opposite direction, losing nearly half of his health in the process.

It is likely that this is a prototype for an advanced stealth Aircraft based upon the technology recovered from the crashed UFO (one mission tells you about a submariner, who was hired to collect something from the bottom of the sea only to die in a freak accident shortly after). The words Rearrange and Segregate can be found imprinted on the side of the UFO. If you rearrange the letters in the word Segregate, it makes Easter Egg. This UFO currently cannot be entered.

The underside of the UFO features a multitude of lens-like objects spinning around at random intervals in the center, suggesting that the UFO is observing everything underneath it. When opened in 3D modeling software, the UFO appears to have two human pilots, further pointing toward reverse engineering or a conspiracy from the government.

The model of the two test pilots of the UFO. 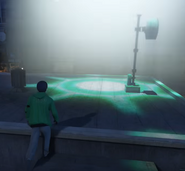 The light emitted from the UFO.