The map is on a large poster-sized sheet, and it can be found in two locations in the entire state of San Andreas. They are in Lil' Probe Inn, hanging on a back wall in the office, and in Mike Toreno's Ranch. The map itself is marked with various small white circles, which seemingly show the locations of UFO sightings around the state.

The map is actually a beta map for GTA San Andreas. This is evidenced because there are some land features and terrain differences on the map which are not present in the final version of the game. For example, there appears to be a small island in the San Fierro Bay, which would have most likely been Alcatraz in the beta version. There is no island in the final version of the game. Also, the long waterway separating Flint County from Red County is nonexistent on the beta map. The entire town of Bayside is absent as well.

Even though the map is from the beta version of GTA San Andreas, players have successfully matched the beta map with the final map, and they have placed the UFO sighting dots in their corresponding locations on the current map. Surprisingly, the dots match up very closely with some important locations within the game. There are a total of 7 marks on the map.

This map sparked a heated debate within the GTA community about the significance of this map, and what the marks mean. Players speculate that the dots on the map mark myth locations or UFO sightings. Another theory is, that Rockstar placed the map in the game as a hint for players to investigate those areas. The fact that all the dots mark important myth-related locations within the game cannot be a simple coincidence. The myth about the UFO map continues to be one of the most elusive myths in GTA San Andreas to this date.

After the release of GTA San Andreas, Rockstar CEO Terry Donovan was interviewed about various myths in the game by Electronic Gaming Monthly. During the interview, Donovan revealed that the UFO Map did not point to any specific locations in the game. 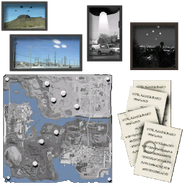 The map appears as part of the "Ufo-pics2" texture. 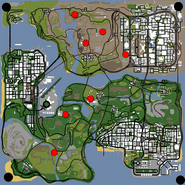 A fan made recreation on the GTA SA map.