GTA Myths Wiki
Register
Don't have an account?
Sign In
Advertisement
in: Cleanup, Myths, Myths and Legends in GTA San Andreas,
and 3 more

The Tunnel Creature is a false myth in Grand Theft Auto: San Andreas.

The Tunnel Creature is what appears to be a pedestrian figure with a pitch-black texture, who is said to inhabit a railroad tunnel in Flint County, which is located just north of the Leafy Hollow farmstead.

The tunnel cuts through a hillside entering from the east and winds several hundred feet before exiting on the northern side of the embankment. The tunnel itself is one of the darkest places in San Andreas as it has no interior lighting.

Interestingly, the lights on most cars sometimes flicker on and off at certain parts of the cave, especially on motorcycles.

This phenomenon was first discovered by a YouTuber. In his first video on the subject, he claims to have captured a figure in one of his in-game camera shots he took during filming. The image's brightness and contrast had to be modified before the figure could be visible. His claim was met with some accusation as viewers believed the image was faked.

A shrieking scream can be heard around the 4:59 minute mark in the video. The sound was extracted from the video, a hard limiter applied and the volume boosted to better hear the audio. The sound-byte was uploaded by a fellow YouTuber.

Towards the end of GTAMythHunter's second feature-length video, a countryside pedestrian with the model name CWMYHB1[1] was found wandering inside the northern entrance to the tunnel. The pedestrian was walking, traveling south towards the western exit of the tunnel.

It was most likely a fake, as there are mods to spawn peds in certain places, and some can be assigned to certain keyboard buttons (e.g. Binding F12 to spawn [Ped Name] with [Weapon Name] could have possibly been used.)

It was most likely not a spawn glitch, because if it were, this would happen every time with the tunnel. For example, the coder put it in the wrong coordinates, and instead of putting them in, say a farm, they put them in the tunnel. Since there are no consistent results and little known causes, this is most likely a fake.

The camera one was also most likely the use of modification, probably to spawn entities, then he put the pedestrian in a dark spot and then claiming he caught something on camera. The pedestrian also could have been photo-shopped in, as he seems to have smoother quality and fewer polygons than normal pedestrians, and seems to have his hands in his pockets, which no animation for the pose can be found in the game files.

Sometimes, trains can be witnessed traveling at exceptionally high speed in and out of the tunnel. Trains in the area have also been witnessed traveling in the wrong direction for the railway or changing the direction of the railway. Players have theorized these trains are apparitions. However, it is important to note a driver can be seen in all supposed ghost trains.

Birds can also be observed flying both in and out of the tunnel entrances, but the reason is not known to the players. 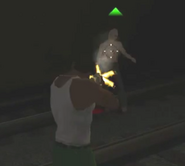