The Blueberry Mystery is a phenomenon that surrounds the town of Blueberry in Red County. Throughout the town, there is a bizarre blue glow that appears on buildings and nature related to the strange lights myth. It is believed that the Epsilon Cult is behind this, due to the close proximity of the cult's rumored main headquarters, and the fact that blue is the color of the cult.

Throughout the town of Blueberry has a bizarre blue glow that appears on certain buildings and structures, including:

The cliff-side west of Blueberry is also bathed in a strange blue light at night. Strangely, this same cliff-side also has a large gap in it. Ironically again, the town is also called Blueberry. At The Farm, the main farmhouse also has a strange blue light shining through the windows. This phenomenon can be witnessed at any time of the night during regular gameplay. The blue light windows are a unique occurrence in all of San Andreas. In the game's manual, The Farm is called the "Cult Location."

One of the testimonials on the Epsilon Program website is given by Jonas Ackerman. He states "Kifflom changed my life. I used to have a well-paid job, a family, and good prospects. Now, I've given that up to find real meaning in wearing light blue and proclaiming my real religion." In his testimonial, he claims that he wears light blue, which seems to be an important color for the Epsilon Cult.

Strangely, the town of Blueberry is at the exact center of San Andreas' map (0.0, 0.0, 0.0). This may or may not be a coincidence, but it is a strange fact nevertheless.

All of these strange observations lead right back to the Epsilon Cult. The Blueberry Mystery continues to be one of the most elusive and strange myths of GTA San Andreas up to this date.

Blue cliff-face near the Panopticon. 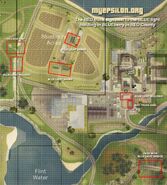 Map of all mystery locations in Blueberry.
TheFarm-GTASA-farmhouse.jpg
Blue lights inside the Cult Farm House.

Exact center of the map of San Andreas in Blueberry. 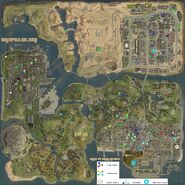 Map of strange lights all around San Andreas.