GTA Myths Wiki
Register
Don't have an account?
Sign In
Advertisement
in: Myths, Myths and Legends in GTA IV, Creatures,
and 3 more

The Bigfoot of Bohan

The Bigfoot of Bohan

The Bigfoot of Bohan is a well-known myth in Grand Theft Auto IV. Geographically, the Welham Park in Bohan has a foot shaped lake and the surrounding area seems likely to contain a large creature. The area is surrounded by large boulders, and in secluded areas around these large rocks, it has been noted multiple times that strange growling noises can be heard in the area. Bigfoot was one of the most popular myths of GTA San Andreas, so there is a possibility that the noises and rumors of Bigfoot are a potential Easter egg.

The park can be accessed by going under the overpass or over the fence by the ballpark, and then walking up the hill for a short time. Bigfoot has been seen numerous times in GTA IV and it is likely that Bigfoot roams nearby. The strange noises and overall woodlands landscape nearby points to the probability of Bigfoot's existence. There are several woodlands and patches of trees all over Bohan, adding a derelict and creepy theme to the island. While there has been no substantial evidence, many fans still consider the Bohan Bigfoot worth investigating. Players' conclusions are that the growling noises are from pigeons and they have yet to see any other evidence other than the foot shaped lake, or pond. As there is lack of the evidence and the fact that there are no forests in GTA IV, this myth is said to be unlikely. Also due to small size of Boulevard Park, there aren't many chances to spot Bigfoot.

The Parsons Hotel in GTA Vice City has a small scale pool on its rooftop that exactly resembles the geographical shape of the Welham Park lake. The lake may be a tribute to the Parsons or just a coincidence. 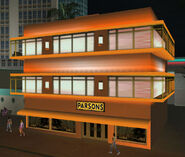