The most famous suicidal pedestrian myth is that of the Suicidal Photographer. This pedestrian spawns on the shore next to the inlet in Flint County, between the countryside and Los Santos. This pedestrian can be seen kneeling down and taking photos of the Los Santos skyline across the inlet, where they will suddenly stand up, and begin to walk off onto a small precipice and fall into the water, where they will drown. This is most likely the result of a pathfinding glitch, in which the pedestrian attempts to walk directly towards the nearest pedestrian pathway, which is across the ocean in Los Santos.

There are many strange pedestrian spawn glitches that may occur inside the Caligula's Palace.

Random pedestrians may sometimes spawn on the roof of the casino and will be walking around. Their paths are completely random, and some of the pedestrians may walk off the edge of the building and fall to their deaths.

In the Cluckin' Bell restaurant located in Los Santos, just north of Grove Street, pedestrians may accidentally spawn at the top of a power line pole in front of the restaurant. The pedestrians will then walk off it and land on the ground below, but the fall is rarely high enough to cause a significant decrease in the pedestrian's health.

In the easternmost area of Santa Maria Beach, pedestrians can spawn on top of a palm tree. The pedestrian will walk towards the sidewalk and fall, taking a minuscule amount of damage. The spawn happens because the palm tree extends a little bit onto the sidewalk, where the pedestrian pathway is.

While this occurrence is technically not the result of a spawn glitch or an Easter egg, it nevertheless deserves to be listed on this page. In some 3D Universe games, with GTA San Andreas in particular, pedestrians have the tendency to jump into the path of the player's vehicle, effectively making the player run over them with their car and killing them. While initially this was thought to be an Easter egg referencing pedestrians attempting to commit suicide, this is actually a glitch. Pedestrians are programmed to jump away from the player's path if they are driving towards them, but if the player changes their direction or turns slightly at the last second, the pedestrian may end up jumping in the wrong direction. While this is quite common in GTA San Andreas, it has been rectified in later GTA games, and the glitch is almost nonexistent in the HD era games.

The Suicidal Photographer in Flint County.

A pedestrian jumping from the Emerald Isle.

Two police officers jumping off the roof of Caligula's Casino.

A pedestrian falling from the sky at the Driving School. 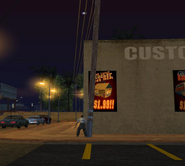 A pedestrian after falling off a telephone pole near Cluckin' Bell.

The pedestrian in the white shirt walks away after falling from a palm tree.