"Stygian Houses" refers to an abandoned residential region in the relatively poverty-stricken district of the city, Little Haiti. The indistinct outlook of these eight houses certainly interprets bad omen, as described by local legends. Some of the houses are two-story, and the rest are three-story. The abandonment of this region is vague to this date.

A group of myth hunters have interconnected this weird event to occult facts and have put forward their thesis regarding the event, stating that the region is oddly related to Funeraria Romero and that the Romero's ancestors may be very well behind this eerie evacuation. In light of the theory, the Romero's supposedly abducted the residents, leading them to evacuate the region. This is slightly supported by the fact that the basement in the region leads to the local restaurant by the Romero's, known as Riverside Pavillion. Legends say that Romero's effectuate the restaurant as a hideout to conceal the abducted victims.

Some of the other rumor facts include the existence of Eglise Baptiste De La Regeneration, surprisingly located in the same area. Some have theorized that the church is oddly interlinked with the houses and this scenario may date back to the riots that took place in Miami.

Moreover, urban legends, specifically Auntie Poulet and Haitian Voodoo Rituals, are circulated in an unverified manner. According to these tales, Voodoo was practiced in this region, cursing the residents with a formidable hex. However, these claims aren't demonstrated and these tales remain a bizarre mystery.

The Stygian Houses are likely based on the bygone fictional towns that were inhabited by Salem witches. As a matter of fact, due to the church located nearby, the abandonment can be conceived, which is most likely due to protest and public execution led by the church. In light of the deserted outlook, this may be plausible. In addition, several stairs meet a dead end with no railing, a common trap set by witches to lure their prey by making them fall off the stairs. This is further supported by the irregular structure of certain other houses, making it a potential hideout for Coven Witches.

The Stygian Houses didn't exist in the year 1984, and the land was one of Vance's empire building after Marty Jay Williams was wiped out. One of the Victor Vance Empire Building is in the same location circa 1984. After the events of GTA Vice City Stories, Victor Vance temporarily leaves Vice City and shifts to Panama. Upon his return, he is assassinated. As a result, the Vance family loses their stronghold, leaving it as the Haitians territory and this event causes his empire building being abandoned, but the theory possesses genuine loopholes, largely due to developer's lack of response and inability to explain the construction of such old structures and changes in a quick span of time. This huge rift between the two games has left the theories into an even more puzzling pandemonium. 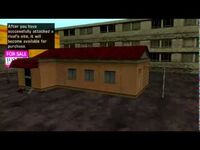 A more rational theory that assists to solve the mystery is that Victor Vance's empire was taken over by the Haitians between the events of 1984 and 1986, leaving the Haitians to build their own territory and small-scale houses due to the huge Cuban and Haitian immigration that took place between 1984 and 1986, assisting the Haitians to easily populate in the district. However, the abandonment of the Stygian Houses in 1986 is still inexplicable, thus assisting myth hunters to ponder over the paranormal edge.

Technically, the idea of Victor Vance's empire building emerged after GTA Vice City. As GTA Vice City Stories, a prequel to GTA Vice City, was made years after the original game, thus indicating that the developers may have jumbled the entire storyline, ignoring the Haitian immigration and setting a universe entirely dedicated to Victor Vance. This has led players to believe that the Victor Vance Empire Building could be just formed by ignoring the events of GTA Vice City.