GTA Myths Wiki
Register
Don't have an account?
Sign In
Advertisement
in: Myths, Myths and Legends in GTA V, Proven Myths,
and 2 more

Sharks are aquatic species featuring in Grand Theft Auto V. Sharks were commonly associated with myths in games prior to Grand Theft Auto V, mainly due to the fact that their presence was less common or non-existent in these games.

Sharks are proven to appear in GTA V. With the inclusion of the ability to dive underwater in GTA V, players will be able to spot sharks in the ocean, alongside other marine life. Sharks are calm in temperament, but will attack the player unprovoked if they stick around the shark for too long. Sharks are also known to circle around the player a few times before attacking, much like predator sharks do in real life. If a shark becomes provoked by the player, it will appear as a red dot on the player's mini-map. Any attack by a shark is an instant kill to the player. Fortunately, getting eaten by a shark unlocks the achievement Out Of Your Depth. There is also a sculpture of a shark made of sand on the Vespucci Beach in West Los Santos. The player can also kill a shark with a knife which requires a lot of skills and luck.

Sharks also make up part of the boundary of GTA V's map, if the player either sails on a boat, or flies on a plane too far from the map, the boat will sink, or the plane's engine will fail respectably, once the vehicle is destroyed a shark will appear instantly and will unavoidably kill the player, this phenomenon is known as the Bermuda Triangle.

The Megalodon is a myth that was started by a user named Stickwars99. The myth lends its origin to the Battlefield 4 Megalodon Easter egg. In the waters of Grand Theft Auto V, players have reported seeing a huge shark that can swim very fast. When it is approached, the creature will swim very quickly away from the player. No one has been attacked by this giant shark, but reports say it is carnivorous. It has been seen to the north of the map near the waters of Mount Chiliad. One possible explanation could be the in-game rendering time while underwater. On most occasions, textures on surfaces, like rocks and large aquatic landmasses, take several seconds to render in, making large rock formations appear like moving creatures underwater. Like all other wildlife, sharks are currently not present in Grand Theft Auto Online. 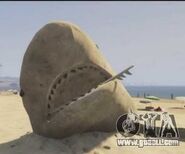