San Fierro Bay is a large body of water located in northwestern San Andreas, that separates the areas of San Fierro from Tierra Robada and Bayside. The bay begins at the Gant Bridge and extends all the way to the Garver and Kincaid bridges, though the actual in-game region called "San Fierro Bay" is much smaller and only includes the area surrounding a cargo ship.

The bay itself is mostly devoid of underwater locations. The underwater surface of the bay is flat sandy ground with rock formations appearing occasionally. There are also two cargo ships docked in the bay, which make appearances during missions for the San Fierro Triads. There is also a submarine at the docks in Esplanade North. Below the water closest to the shoreline, there is a large fault line visible. East of the Esplanade North district, there is a significant rock formation underwater that is located beneath a small sandy island.

A lighthouse once overlooked the bay near Bayside, but it has been destroyed before the events of the game.

The San Fierro Bay is a common myth hunting location for investigators looking for aquatic myths. In many YouTube videos, the bay is the focal point of hunts related to Sharks and the Loch Ness Monster. According to some hunters, being in the bay increases the player's chance of witnessing dolphins and sharks but this hasn't been proven. Another rumor says that circular formations of starfish at the bottom of the sea indicate where sharks are most likely to spawn.[1]

The ghost horn rumor is a myth surrounding a mysterious horn that can be heard when the player is in northern San Fierro. In fan rumors, the horn sounds from a ghost ship somewhere in the bay. The evidence for the myth is that the sound doesn't originate from either of the two ships in the bay and always sounds distant from the player. No ghostly ships can actually be spotted and the sound is most likely just an ambient effect.

In an early version of the game, a parody of the infamous Alcatraz prison was supposed to appear, located in the middle of San Fierro Bay. Though fans speculated about it's location before and shortly after the release, the prison was removed entirely from the game. Remnants of Alcatraz's presence on the map can still be seen in some beta maps that were left in the game. 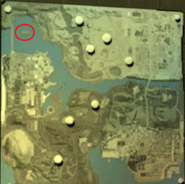 The Alcatraz island in the beta.