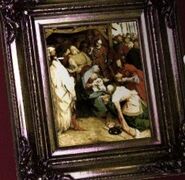 In the following video an inexplicable green glow can be observed from 0:01 to 0:11, this glow can only occur after the Vercetti takeover, due to this fact, this glow has been interconnected with the Ricardo Diaz Ghost. This could be a plausible fact as green glow occurs in paranormal regions. Players have interlinked this glow with the Ricardo Diaz myth and this fact could also be conceivable, with respect to the reason that this glow can only be observed after the Vercetti takeover. This is more likely a transparency glitch that players mistake for the ghost.

The light bulb behind the stairs is non-functional but the light still glows within the bulbs region from an unknown source. It has been speculated to be a slightly occult occurrence, although this fact has also been disputed.

A photograph, featuring a strange smoke was uploaded on the web. The authenticity of the evidence has yet to be disclosed. The smokey figure was captured on the stairs of the Vercetti Estate.