Pyramid Head is a tall creature with a man's body and a large pyramid-shaped head, the latter being his most distinguishable feature.

The Pyramid Head is rumored to be found in Rodeo, Los Santos in the Creepy House. Because of its suspicious rust texture, it is hinted that the Pyramid Head lives there. They have also been rumored to show up in the Vinewood Cemetery late at night.

Although various photos show Pyramid Head, most of them are mods or fakes, thus Pyramid Head's existence is false. 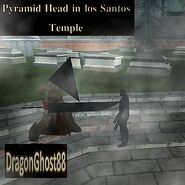