GTA Myths Wiki
Register
Don't have an account?
Sign In
Advertisement
in: Myths, Myths and Legends in GTA Vice City, Preachers,
and 5 more

Pastor Richards is a reactionary priest, inspired by 80's preacher Jimmy Swagart. Richards is the head of the Pastor Richards Salvation Statue Organization, a group which plans to raise enough money to build a statue of Pastor Richards himself and launch it into space. The organization proclaims to grant salvation to the donors, this claim was later revealed to be a fraud. One of his controversial talks include his interview with Maurice Chavez for VCPR; 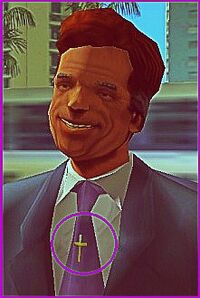 Richards has since been attempting to bribe officials at NASA for rocket technology. It's likely that Richards is a conspiracy theorist and false prophet. His book Heal based on salvation claims was completely fabricated and mainly gained negative reviews. Another strange fact can be noted that Richards wears a purple tie with a cross on it, it's plausible that it is related to his false prophet image. Richards' artwork is also featured in the Religion section of the Vice City manual.