Padfoot is extracted from the famed novel Harry Potter and the Prisoner of Azkaban and is largely based on the ability of Sirius Black to transform into an animagus, morphing himself into a vicious dog. A group of players hold the belief that Padfoot is seen in the vicinity of Hotel Harrison, assaulting pedestrians and vanishing into the dark. According to these theorists, GTA Vice City was published after the novel, making it feasible for them to include it in the game, but this theory has certain genuine loopholes, including copyright violations, which would lead Rockstar to pay more than a fortune to the author, J.K Rowling, as the novel serves as the best selling book of its time. This myth is merely a bogus claim and a result of mods around the web. Moreover, these hoaxers may present the existence of Full Moon Warehouses as a reference to Full Moon Werewolves in their defense, but this doesn't grant its authenticity.

A glaring problem with the myth is that the Harry Potter series of books takes place in the United Kingdom, while Vice City is set in the United States. 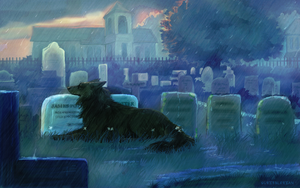