Between Whetstone and Back O' Beyond

The Oram Bridge is a mythical location in Grand Theft Auto: San Andreas.

The Oram Bridge is a large arch bridge that links Flint County to Whetstone. It is a part of the highway system and is found at the southernmost part of the map, with the ocean below it. Myth hunters have linked the bridge to the Epsilon Program.

The bridge has been investigated by Epsilon hunters, claiming that it is significant to the cult in some way. On the Epsilon Program's website, it states that someone who wishes to join the cult must "travel through the dawn to the pass pictured in our brochures".[1] Epsilon hunters theorized that the bridge could represent a figurative pass.

Framed photographs in safehouses also show the Oram Bridge. One picture shows the bridge from the ocean, but with a strong red tint on the image, possibly indicating a sunrise or sunet, associated with the Epsilon Program's "travel through the dawn" statement.

Another image in the Johnson House shows a the bridge. This was claimed to be the Oram Bridge seen from Shady Creeks, because a beater Sadler will spawn. This has been interpreted as the "red truck with a dent on the right fender"[1] which is needed to join the Epsilon Program. However, this is actually an early version of an unnamed bridge in Red County, near Fisher's Lagoon. 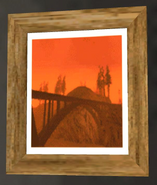 The framed picture of a Red County bridge, which is often mistaken for the Oram Bridge.