This Easter egg can be found in Chiliad Mountain State Wilderness. It is an Easter egg, which replicates a scene from the 2007 film No Country For Old Men.

Like in the movie, the player stumbles upon a drug deal gone wrong. The player finds a group of cars, filled with bullet holes and having their horns on, parked in a clearing in the forest. Clearly, a drug deal has ended badly, and there are few survivors. Various bodies of dead drug dealers litter the area, and some are still alive but wounded on the ground, implying that one of the parties involved in the drug deal shot the other one and intended to get away with both the money and the drugs. Down a hill past the cars is one last drug dealer sitting by a silver briefcase who is also dying of his wounds. He warns the player not to take the case as they will be hunted down for it. The case contains $25,000 that Trevor, Michael, or Franklin can take from the scene. Once the case is taken away from the area, a gang of drug dealers will pursue the player and demand the case back. The player has to kill them to keep the money.

In the movie, the case contains $2 million, and a deranged serial killer hunts down and kills the hunter who took the case. 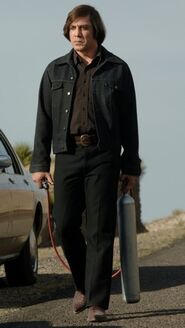 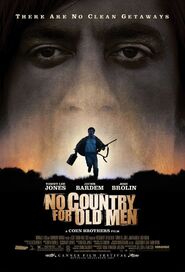 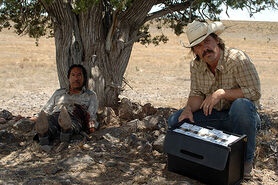 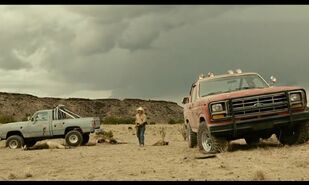 The deal gone wrong similar to the one in GTA V. 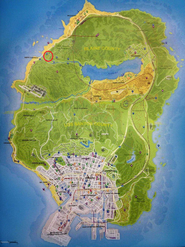 The location where this random encounter can be found.
Add a photo to this gallery