In real-life, there is a similar myth in Nordic mythology, namely the Golem. The Golem is a giant, commonly shown as a creature made from stone, which is believed to live in forests and is believed to be a nature god.

The appearance of certain trees from a considerable distance may make one of the trees look a gigantic figure, easily giving the impression of a giant and may possibly be the origin of the myth. 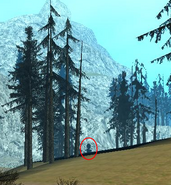