The mountain's peak is the highest point in the whole state of San Andreas. It is one of the famous mythical locations in the game. The treeline ends halfway up the mountain leaving the treacherous cliffs and massive boulders clearly visible. The majority of the myths are said to be located halfway up the mountain, but they can also be found near the top. A crude silhouette of a face can be seen on the vanilla map, which many players believe to be Bigfoot. Also, airplanes frequently crash into the mountain's rocky faces. In the west of the mountain, there is a cabin similar to Shady Creeks, it is believed to be a home for many other myths, and in the east of it, a cave can be found, also believed to be a home for The Woods Creature, Bigfoot, or the Yeti. There are also reports of Stalagmites at its peak. 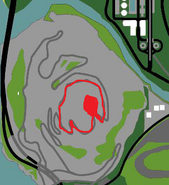 Mount Chiliad as seen from the town of Angel Pine.