Montgomery is a small town, a population of 3,623, located in the northern section of Red County in Grand Theft Auto: San Andreas.

The town has many small businesses from the Inside Track horse betting shop to an old Sprunk factory that looks to be recently closed. Overall the town looks run-down, and many players claim the town is creepy to a degree because of the crumbling buildings and isolation from other cities and towns in the state.

Curiously, it is also the only municipality in San Andreas besides the Ghost Towns to lack any safehouses.

Thanks to Montgomery's multiple closed, desolate, and even destroyed buildings, players get an uncanny feeling while driving throughout the area, leading myth hunters to thoroughly investigate the area and the discovery of many anomalies.

If the player heads near an intersection in the middle of town, they will notice a strange burned down apartment complex, referred to by fans as the Hell House. In many areas of the town, the player can find blue windows, blue lights, and almost every building in the town has something blue on it. Blue objects in San Andreas are typically associated with the Epsilon Program. Another reference to Epsilonism is the beater Sadler, associated with the Red Truck, that spawns in the city; but this only happens on the PS2 port of GTA San Andreas. In the city, buildings are organized into blocks, with buildings on the perimeter, and with an empty space in the middle. One of these blocks has a seemingly normal well, but on closer examination, it is actually an area to store trash, along with radioactive materials. Known as the Biowell, this area is home to many myths, including its inhabitant Samara, and possibly Piggsy: who has been linked to the well.

Akin to Grand Theft Auto IV, the Sprunk Factory located in Montgomery is abandoned and presumed to be haunted. While the building itself is not enterable, fans have still claimed to hear strange sounds from outside the factory. The Crippen Memorial Hospital, another desolate location, has the same status and theories as to the Sprunk factory. The Bio Engineering business in the city has been investigated for links to the Biowell. Pedestrians can often have spawn errors in the city, and because of this, pedestrians that would normally spawn in Desert areas will instead spawn in the countryside. Mr. Trenchcoat and many of the other mythical desert pedestrians are, of course, included in the spawn. 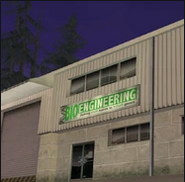 The Bio Engineering business.
Add a photo to this gallery