The Loch Ness Monster, also known as the Fisher's Lagoon Creature or Nessie, is a false myth in Grand Theft Auto: San Andreas.

Like many other myths, it started in 2005 when players reported seeing black lines in the water, or even the head and neck resembling the Surgeon's Photograph. The most common sighting area for this creature is Fisher's Lagoon, north of Los Santos, where the Rusty Wheelchair can be found. There are some fans, who have also claimed to have seen this myth south of Los Santos. Other places where they said the monster could be found is in the San Fierro Bay, around the Gant Bridge, and in the Ghost Lake in Back 'o' Beyond. Players have said that they would put CJ in a boat and leave the game on all real-life night. Then in the morning, CJ would end up in the hospital, hinting that the Loch Ness Monster killed him, although it could be either from starvation or an airplane falling on the player. Also, players have said that once the player touches the monster, CJ dies immediately. Rockstar has claimed multiple times that there is no Loch Ness Monster in the waters of San Andreas.

Many players have tried to debunk this myth by claiming that the underwater shadows are just visual glitches.

Up until now, there has been very little proof that any type of large creature exists in Fisher's Lagoon, aside from various blurry photographs and videos. 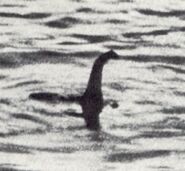 Real-life photo (Surgeon's Photograph.)
Add a photo to this gallery