"Killer Bees: Not a Threat in Liberty City!"

The Liberty Tree Myth Article, titled "Killer Bees: Not a Threat in Liberty City!", featured on Rockstar's official website, included numerous myths, some of which went on to become cult myths later in the series. A similar article returned in Grand Theft Auto IV.

The article was posted on July 1st, 2001, by Frederic Pierce, and debates the plausibility of urban myths in Liberty City. The article claims that rumors are running wild around the city, including those about Killer Bees, Strange Weather, Giant Lizards, and Zombies. The writer also stressed that such rumors are false, and are an attempt to cause uproar in the state. The article further turns down any possibility behind the Killer Bees rumor, and states that the atmosphere isn't adaptive for such beings, and they aren't capable to survive in such latitudes.

It is likely the mention of a Giant Lizard attacking the city is a reference to Godzilla, the gargantuan reptilian, who stars as the antagonist of a series of tokusatsu films of the same name from Japan, first released in 1954. Alien landings and dog bans are also featured in different articles from the newspaper. 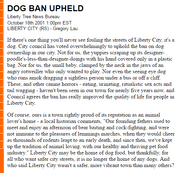