King Kong is a giant gorilla that supposedly attacks the Downtown district of Los Santos. He has extremely high health and is almost impossible to kill unless the player has a powerful weapon, Jetpack, or other aircraft. This myth is a mod and doesn't even make sense because, in the actual movie, King Kong attacks New York City, not Los Angeles.

This myth also exists in GTA Vice City. The famed ape appears in the movie, The Hairy Beast from Hell. However, it doesn't exist physically in the game other than in the movie.

In Grand Theft Auto IV, the Helitours guide may point out the Rotterdam Tower, a GTA IV's equivalent to the Empire State Building, and say that if he was that "giant ape" he would "climb that building too." 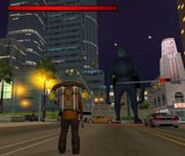