John Holmes was involved in a mass murder case in the 1980s that took place on Wonderland Avenue in Los Angeles. The John Homes on Washington Avenue in GTA Vice City is said to be a reference to these murders.

Myth hunters present evidence that the building John Homes is situated in is completely abandoned. Moreover, there appears to be a famous stop sign near the real-life Wonderland Avenue, right in front of the crime scene. In GTA Vice City, there are several stop signs near the alleged building. It could be a vague reference to John Holmes. However, it could also be a far-fetched theory. 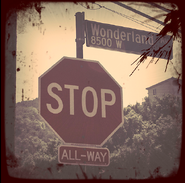