GTA Myths Wiki
Register
Don't have an account?
Sign In
Advertisement
in: Myths, Myths and Legends in GTA V, Proven Myths,
and 4 more

The name is ironic, as it is responsible for producing knock-out gas and other nerve toxins. It is revealed in Monkey Business that they're working for the IAA to make biological and chemical weapons, and use agents for testing on animals and alleged usage on the public.

The Humane Labs and Research facility is located in the San Chianski Mountain Range, and is located on Chianski Passage. There is an underwater tunnel used in the mission Monkey Business stretching from the ocean, all the way into the center of the research complex.

Upon entering the Humane Labs and Research property, the player will be given a 4 star wanted level (Equivalent to Fort Zancudo.) Keep in mind, this facility is rumored to be working with the IAA making biological weapons for them, however, they are known by the media and the people as just a perfume factory, which is obviously a facade for their true purpose.

In the Humane Labs and Research facility, there are eight operating departments. They are:

If the player has chosen the smart approach in The Jewel Store Job, then one of the preparation missions will require Michael to steal BZ knockout gas canisters from a Humane Labs Boxville, that is along the south of Interstate 1. The player can shoot the rear section of the van to drop the tear gas, or they can skillfully rob the van and take it to Lester.

Later in the game, during the mission Monkey Business, Michael, Dave Norton, and Steve Haines infiltrate the headquarters of the Humane Labs together through an underwater exhaust shaft, so that they can steal a chemical weapon that was going to be used by the IAA in a false flag terrorist attack to gain more governmental funds. The trio together steal the neurotoxin, but they are later discovered by the security, who aims, and then opens fire against them. In the end, they manage to escape with the weapon. Afterwards, the news spread around town about the shootout in the labs. It was then wrongfully reported as being caused by some thieves who had wanted to steal a perfume recipe.

Also in GTA Online, there is a heist involving stealing files from Humane Labs and Research.

One possible origination of Ratman is that an experiment on a monkey could have caused a genetic mutation that horribly disfigured it, and it busted out of the facility, fleeing into the tunnels and sewers. Evidence supports this theory as the scientists do perform chemical experiments there and test on Monkeys. There are also rats in the game.

Relation to the Jackal and other Creatures

A possible explanation to The Jackal and other cryptids within the game is that these are various subjects that underwent extensive testing, only to, like Ratman, escape to the distant corners of San Andreas. Out in the open, they cause havoc in the form of otherwise paranormal phenomena. 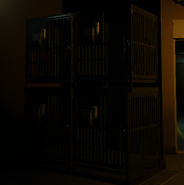