Haitian Voodoo Ritual is a proven myth in Grand Theft Auto: Vice City. Haitian Voodoo was the first ever dubious ritualistic practice that turned out to be authentic, both in a descriptive and magical form.

Haitian Voodoo is a ritual practiced by the Haitians. This Voodoo ritual is also practiced by Auntie Poulet and Haitians inhabiting Little Haiti in Vice City. Auntie Poulet's Grandfather is rumored to be a part of the Voodoo myth in the game.

Below is some major evidence regarding Haitian Voodoo in Vice City:

Voodoo skulls, candles and other equipment can be found at Auntie Poulet's residence. It is a clear reference to real-life Skull Voodoo. Haitians may use Voodoo to defeat their foes or gain dark powers.

Auntie Poulet gave Voodoo Potions to hex Tommy Vercetti during the mission Juju Scramble, which Tommy mistook for tea refreshment. Auntie Poulet was astute enough to brew a forceful Voodoo Potion, to protract its bewitching potency. Tommy did not possess any memory regarding his services to the Haitians.

Haitian Voodoo is also mentioned in the Vice City manual. The manual has apparently praised Auntie Poulet's Voodoo abilities preferring to visit her. This statement further cements the authenticity of this ritual, by Rockstar themselves.

Voodoo Dolls at the Storm Drain. 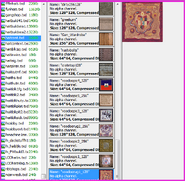 Erzulie & Dambala in the internal files.

Bossou The Three Horned Bull in the Internal Files. 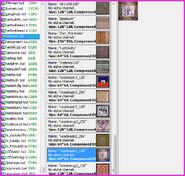 La Sirene in the internal files.