GTA Myths Wiki
Register
Don't have an account?
Sign In
Advertisement
in: Myths, Myths and Legends in GTA San Andreas, Ghosts,
and 4 more

The Ghost Town Figure myth was made famous a short time after the release of Grand Theft Auto: San Andreas, when players have reported seeing a strange black figure walking around the Ghost Town at night. The figure is said to disappear suddenly if the player gets too close. There are various pictures and videos online showing what players think the Ghost Town figure is.

If the one listens to the police radio inside any law enforcement vehicle long enough, there is sometimes a report from a policeman that says "We got a hysterical old woman in Las Brujas. Says she's a witch or something." However, this may just be a pun on the English translation of Las Brujas, which is The Witches.

With all that in mind, there is another, more believable theory. In the mission High noon Officer Hernandez supposedly gets killed when Pulaski fired at him. However many say that he was not killed as in the grave that CJ dug, Hernandez's body does not appear. It is possible the ghost town figure is possibly Hernandez. An even spookier fact is that while doing the mission High noon Hernandez's body will still not appear when you check it. This could be due to the limited resources Rockstar had or another yet creepy myth? However, more references are for the witch as there is a radio call for it on a police vehicle and the small town itself is named The Witches. This myth also includes a reference to another myth. If you look at the cemetery in the town you will notice there are 6 graves. But not far away there is a Bobcat and 6 body bags in a large dug up hole. Another theory states that long before when the town was filled with life a witch was executed there and she swore to return in the future. However, most of the encounters are modifications or photoshopped or just a simple pedestrian with a black texture. 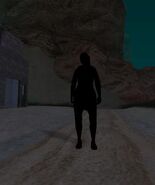 An armed figure attacks the Player.