GTA Myths Wiki
Register
Don't have an account?
Sign In
Advertisement
in: Myths, Myths and Legends in GTA San Andreas, Vehicles,
and 3 more

Ghost Cars are one of the most popular myths in Grand Theft Auto: San Andreas. It is also one of the first of the myths that have been proven to be real.

In the game, there is a variant of the Glendale car, called glenshit in the game's internal files. This vehicle differs from the normal Glendale because all of its body panels, bumpers, and doors are dented. Its damages cannot be repaired by visiting Pay 'n' Spray or by using cheats. These damaged cars are nicknamed "beaters".

Several of these beater Glendales spawn in the woods of Back O' Beyond. However, they spawn on the side of a steep hill, which makes them slide to the bottom of the hill as soon as they spawn, making it appear as if they are driving by themselves. This phenomenon can be witnessed at any time in the location in Back O' Beyond. It is unknown if this is a glitch, or if game developers implemented this on purpose. The exact location where these cars spawn is in Back O' Beyond, just south of two horseshoe-shaped rocks. One of the dented Glendales also spawns in the Angel Pine Junkyard.

Many fan-made videos show the cars whirring to life with their lights turning on and attempting to run down the player. While this happens, the car is immune to damage, and will not stop unless the player is killed, or the car is somehow damaged beyond driving. No evidence that supports these videos' validity has ever been found.

There is a glitch on some PS2 versions of the game, where the ghost car that "rolls" down the hill spawns incorrectly, right through a tree. If this occurs, the driving wheels can be witnessed spinning on the ground silently, while the car remains stuck.

The Sadler is another vehicle in GTA San Andreas that has a beater variant. The Sadler, an older-style pickup truck, may also spawn as a beater, in which its body panels and doors are all dented. Like the Glendale, the vehicle cannot be repaired by visiting Pay 'n' Spray or by using cheats. Although the Sadler plays no part in the Ghost Cars myth, several beater Sadlers may occasionally spawn in various locations around Back O' Beyond. The beater Sadler is also involved in the Red Truck myth, part of the mystery surrounding the Epsilon Program.

Sometimes, players might see these being used as getaway cars by the criminals. The cars are wrecked, but the game chooses any random ped and car for the player to chase. 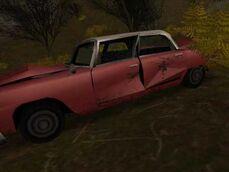 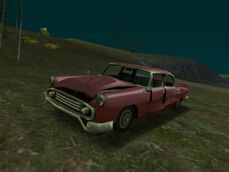 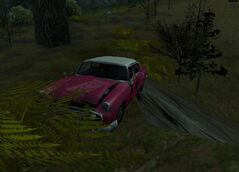 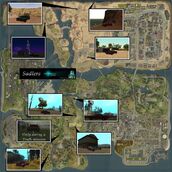 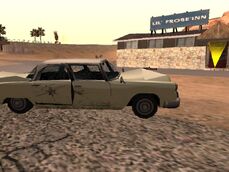 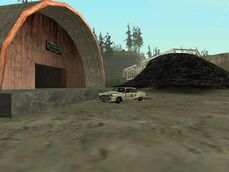 Beater Glendale at the junkyard. 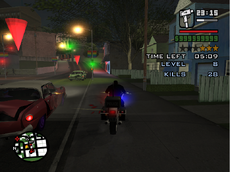 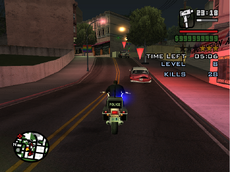