During the month of August, 2014, the GTA Myths Wiki was in a very precarious situation. A large portion of the staff and community attempted to perform a coup on the founder of the wiki and uncorrupt staff. For about the entire month of August, the wiki was turned into a battlefield until it all came to an end on August 17 with the honorable staff coming up victorious.

This page briefly documents the catastrophic events that surrounded this dark time.

Mid year - July 31, 2014 - the badges system is getting heavily abused and pointsgaming is rampant. Pointsgaming has always been a problem, but especially during this time it was very common. Users were desperately trying to reach the top of the leaderboard, without caring what damage they left behind. Within the GTA Myths Wiki's staff and community, there was underlying cliques, and tensions were building up.

Boomer8, an administrator at the time, took action by blocking a user who was breaking the pointsgaming rule after repeated warnings. Boomer was criticized for this; with uncivil and provocative accusations made by AverageAnarchist, who was backed by one of the bureaucrats at the time - Gunshow2. Gunshow, had prior disagreements with Boomer, and was bias against him. Boomer, following the policy on incivility, blocked the unruly user. Which followed afterward was the beginning of the most turbulent time in GTA Myths Wiki history.

The Midst of the Conflict

August 1, 2014 - August 16, 2014 - to get revenge for the block Boomer gave him, AverageAnarchist created a demotion request laced with personal attacks. Multiple staff members voted in support of the request and it was "closed" within a couple hours. One of voters involved (Mashi) misspoke, and revealed that Gunshow2 contacted him offsite and promised to demote Boomer in return for Admin rights. Sasquatch101, the founder of the wiki, saw the political trickery involved and removed the rigged request. Afterwards Gunshow2 admitted to bringing in offsite users just to demote Boomer. After reading this, Sasquatch demoted Gunshow2 from his bureaucrat position to administrator, due to the policies he broke. Gunshow, in a rage, continued the harassment of Boomer by filing more demotion requests. To no avail, the requests were taken down.

Towards the end of the conflict, Gunshow mislead a Wikia Staffer and tried to demote both Sasquatch and Boomer on a forum. After being informed of the lies and fabrications Gunshow told him, the Wikia Staffer backed Sasquatch on taking down the demotion thread. Afterwards, a radical member (AK-28) of the rouge GTA Myths Wiki staff attempted to illegally ban both Sasquatch and Boomer. Subsequently, AK-28 was demoted and banned for life the very day. That same day Sasquatch stripped Gunshow2 of all staff privileges. These were the final days of the rouge staff members.

August 17, 2014 - Sasquatch was messaged on community central by a presumed member of the rouge staff. LS11sVaultBoy contacted Sasquatch and apologized for going against him. He revealed that Gunshow2 had a secret Facebook group that was conspiring against both Sasquatch and Boomer; fueled by racism and hate. Sasquatch was shocked to see such secretive discussions, and the racist anti-Semitic images which Gunshow made. In return for this incriminating evidence, Sasquatch gave Vaultboy immunity; then tended to the matter at hand on the GTA Myths Wiki.

August 17, 2014 - all of the conspirators were demoted and banned, with a message left on their wall by Sasquatch explaining that he knew about their secret Facebook group and racist talks. Before receiving his eventual ban, a frantic Gunshow2 admitted guilt to Sasquatch and made a thread repeating the information that Vaultboy already revealed, in an attempt to receive mercy. Sasquatch did not buy into it and banned him for life. A few days after Gunshow2 was globally blocked across Wikia. August 17 marked the end of the turmoil the wiki endured for months. The wiki was once again at peace.

August 18, 2014 - Present - After the banning of the conspirators, only half of the wiki's staff remained. The wiki lost a lot of users, and was in a state of recovery for a while. Eventually, the wiki did recover and the new generation of users arrived. The wiki has been thriving ever since, and such turmoil has never occurred again. The conspirators, however, viciously vandalized the wiki for months after receiving their banishment. The wiki has been swarmed with vandalism, but to no avail the vandals were stopped. This vandalism and harassment lasted for more than a year and a half after the conflict took place.

Since then, new Policies have been made to ensure the safety of the wiki, and prevent another conflict like this in the future. This page was written to not only briefly document what happened during this turbulent time, but to also be a reference to future leaders of this wiki to follow.

Some screenshots have been left out due to the explicit content. 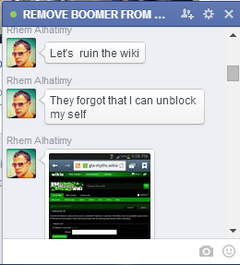 Example of the group's destructive behavior. 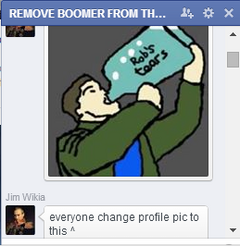 The extreme hatred felt towards Sasquatch.

The hatred that fueled the group. 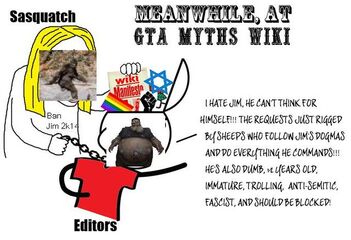