The El Gordo Lighthouse is a large lighthouse located off the eastern coast of San Andreas in Cape Catfish in Grand Theft Auto V. The lighthouse and the large house on the mainland are the most prominent features in the small Cape Catfish settlement that's based off Cape Cod. The overall location and rainy weather conditions give the area a creepy feel that matches the only known resident.

Besides Ursula, who lives in the home near the lighthouse, there are no known residents in Cape Catfish. When Ursula encounters Trevor or Franklin while hitchhiking, she comes off as being mentally ill and dangerous. She goes on to tell about her life, saying how the last person to pick her up choked to death on his own hand, suggesting that she killed the person. She also states how a gardener used to visit her a few times a week, and "got sick." She also mentions another visitor falling down a cliff. Her mother is also recently deceased which has sprung rumours of Ursula killing her. The presumed grave of her mother is located on the mountain south of the lighthouse.

Another view of the Lighthouse. 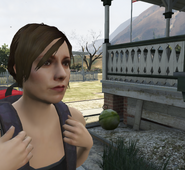 Ursula at her house.