Drive Thru Confessions is a business and a mythical location found within Grand Theft Auto: San Andreas.

The large grave at the end of the graveyard is suspicious, due to its cover being partly shifted, so the inside of the grave is visible. At night, there is a strange green glow that emanates from the inside, which some players say is evidence hinting paranormal activity is occurring in there. Fans were quick to notice that there is no coffin or body found inside the sarcophagus, which some have claimed to be the work of a grave robber. The missing body has led some to believe that Zombies appear in the area. The strange lighting, missing body and general atmosphere have led the area to be one of the top hot-spots for zombie activity in San Andreas. Among the minor tombstones, one can find the grave of someone named Steven Mulholland, which is an Easter egg borrowed from Grand Theft Auto: Vice City. Steven Mulholland is a game developer at Rockstar Games and designed the countryside areas of the game, including Palomino Creek. There is also Scott Wilson's grave, who is a Rockstar developer as well. Drive Thru Confessions has an advertisement found in the instruction booklet of console versions of San Andreas. 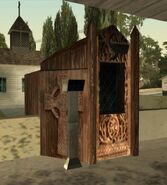 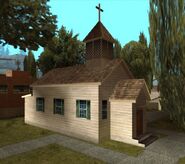 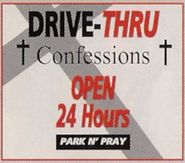 Church's advert in the game manual.

The open grave's glow once more

Inside the open grave.