GTA Myths Wiki
Register
Don't have an account?
Sign In
Advertisement
in: Myths, Myths and Legends in GTA San Andreas, Creatures,
and 5 more

PROVEN (as a texture)
UNLIKELY (physically)

Demons are a myth in Grand Theft Auto: San Andreas that are located across the state.

The rumor of Demons within GTA San Andreas first sprung up soon after the game's release. Many internet forum posts showed a wide array of strange textures found all over the state of San Andreas. Some of the more notable textures include a Satanic face found in the safehouse in the town of Blueberry, and a strange, child-like face found on the top of a beige building in Los Santos.

If the player goes near the Blueberry safehouse and heads towards the small "nook" in between their apartment and the neighboring one, they will see a face embedded on the ground that looks Satanic horns and other demonic features are covering the face. One of the apartments within the same apartment block also has a police warning tape, implying that a crime was committed there. Many fans have claimed that the "crime", was a demonic sacrifice of sorts.

In Los Santos, the player can find a tall beige building just west of Idlewood in the Little Mexico map sector, across the street from Wu Zi Mu's racing side mission. This building, seemingly irrelevant to myths, soon caught players' attention as they discovered something sinister at the top. If the player uses a jetpack to fly to the top of the building, there is a small part of the walls protruding upwards, presumably preventing anyone on the roof from falling down, but the textures used to map out this wall is what caught fans' attention. The texture used for this wall contains a child-like face of a disdained bald man. Thanks to the uncanny appearance of the man, many myth hunters have put the theory that the face is actually a demonic cryptid of some kind. The face's wide-open eyes and gaping mouth help these claims.

In Bayside Marina, there is a church. The church includes multiple stained glass windows all around its exteriors, although it uses the exact same texture. Upon first sight, the stained glass appears to just depict an angel, but on closer look, the glass represents Lucifer and his betrayal of God. It shows the Angelic figure, but the Angel has dark, foreboding demonic wings and appears to be descending into a Hellish environment, similar to the story of Lucifer in the Holy Bible. This church has been dubbed "The Satanic Church". 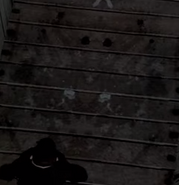 The demonic face in Blueberry. 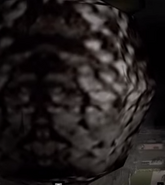 Some faces on a palm tree.

Faces on the roof of the Los Santos building.