The Chainsaw Killer, also known as the Apartment 3C Killer, is a prominent and an unlikely myth in Grand Theft Auto: Vice City.

The myth took off when a user claimed to have heard chainsaw noises in the large alleyways found in the secluded areas of Washington Beach. Investigations regarding the claim led to some evidence being found. It is plausible that the Chainsaw Killer is hiding in Vice City's isolated alleys. Several minor sightings have also been reported at the Abandoned Park.

Another conceivable piece of evidence is a dagger that can be found in the same alleyway where the noises were recorded. The dagger could have been used by the killer. The horror film Knife After Dark is also based on a psychotic teenager who goes on a killing spree in the dark with his knife. This dagger and the rumored killer in the alley are a likely reference to the movie.

The Chainsaw Killer is likely involved in the Apartment 3C massacre. Apartment 3C's existence serves as more evidence that the killer is still out there. The description of the chainsaw in Rockstar's website about GTA Vice City, mentions that the chainsaw can cut through bones. This is a likely hint towards the massacre.

The dagger in the alley, likely a reference to the killer and the movie.

Strange description of the chainsaw. 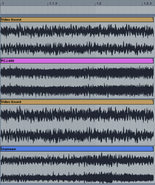