Beverly Johnson was killed in 1992 in a drive-by shooting carried out by the Ballas gang. Beverly was aimed to be standing on the left side of the house when killed which explains the wooden boards nailed across, she was also said to be facing the window looking outside.

Some players have reported seeing the ghost of Beverly Johnson, CJ's deceased mother, inside the Johnson House on Grove Street at night. The ghost allegedly walks down the stairs in and around the living room, and in some accounts even attacks the player. Many players claim that there is an increased chance of the ghost spawning if the in-game day is Friday, or if the player sets their computer clock to Halloween.

If the player throws a grenade in the Johnson House, large transparent squares appear over objects in the house, which disappear over time. These squares could be mistaken for the ghost.

A pedestrian with the same model as Beverly's photo can be found in Los Santos and Las Venturas.

Overall, there is insufficient evidence for this myth to be confirmed. An interview with a Rockstar employee for Electronic Gaming Monthly also said that the ghost was not in the game.

The photo of Beverly Johnson.

The pedestrian that is identical to Beverly's photograph. 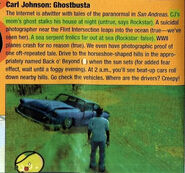 A developer's statement on the existence of the ghost.