GTA Myths Wiki
Register
Don't have an account?
Sign In
Advertisement
in: Myths, Myths and Legends in GTA IV, Ghosts,
and 6 more

In the stairwell of some enterable apartments in GTA IV, there is some graffiti scribbled on a wall next to the staircase. The graffiti contains references to previous protagonists of the GTA Series, including Tommy, Claude, Victor, Toni, and Carl Johnson. Next to Carl's name are the letters RIP, suggesting that Carl Johnson may be dead. However, this graffiti is a chronological error, because these characters do not belong to the same universe as GTA IV. The game contradicts itself again, as multiple billboards for the in-game business Fruntalot feature CJ's likeness. Fruntalot is a parody of the urban styled shops such as FUBU, and it would make sense to advertise a successful gangster such as CJ. On the billboard, CJ is wearing a Black Trilby and Black Suit from Didier Sachs. Some fans have claimed that it is not actually CJ, but is just a coincidence. As Fruntalot's motto is Concrete Jungle, or CJ, furthers the theory that the "RIP Carl" graffiti could be referring to someone else named Carl, rather than Johnson. It could also indicate, that 3D Universe characters ended up forever. 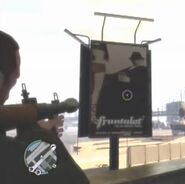