PROVEN (As an Easter egg)

Bruno Hauptmann is an infamous criminal from the early 19th century. He was also considered as the most hated person at the time. He was sentenced to death for the abduction of American authors Anne Spencer Morrow and Charles Lindbergh's son. Bruno kidnapped them and then murdered them in 1936. 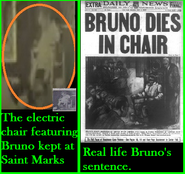