Area 69, also called the Restricted Zone, or the No Fly Zone in the game's files, is a highly protected and secretive secret military research facility in the middle of the Bone County desert just outside of Fort Carson, just north of the Lil' Probe Inn and south to Verdant Meadows airstrip. Area 69 is associated with the long-held rumor of aliens and UFOs in the game. So far there has been no solid evidence that supports these claims, but since its real life counterpart is the legendary Area 51, these rumors have not subsided. Some military vehicles like Hydra can be found here. It is a no-fly zone. If the player flies an aircraft above the area they might be shot down by the SAM sites. They will also be shot if they go near it. The player will gain a wanted level upon entering Area 69.

A lot of autopsy tables can also be found in the base, this might be a reference to the Roswell Incident, in which Aliens were rumored to be autopsied. Players have theorized that the Green Goo was extracted from the the Aliens during their autopsy and the fact is supported by the fact that Green Goo can be seen in the Laboratory in the multiplayer version of the game. Oscillometers are also kept in the lab and it is likely that they were used by researches for measuring the changes in pulsations in the arteries especially of the extremities. Medical researchers also use a digital oscilloscope to measure brain waves. Players have speculated that these were used to measure the brainwaves of captured Aliens. These theories are cemented by the quotations of the speakers during the mission Black Project.

The Desert Building is rumored to have something to do with Area 69. If the player uses a map editor software, such as MeD, the building is listed as some sort of laboratory. The scientist model (wmosci), also mentions about Alien projects and the Pentagon. 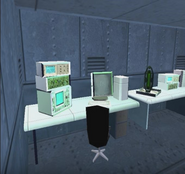 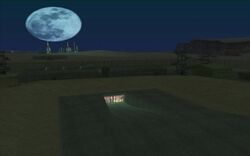 bunker in the desert. Strangely, a large underground bunker is also located in Area 69. It may be plausible that the spaceship is being built in Area 69 itself. This is further cemented by a quote during Black Project in which the speaker cautions that,

The base includes top secret departments for the development of nuclear weapons. A thermonuclear warhead can be found in the base, which runs by a nuclear fission reaction and is a potential weapon for mass destruction. The warhead is enclosed in a non-bullet proof box. The supercomputers kept in the facility reference advance petaflop supercomputers at the NNSA, including old versions of Cray, Tianhe and IBM, major supercomputers possibly used for nuclear development.

A map inside the control room.

A fan-made blueprint of the interior.