Animals are all pets and fauna of a particular region or area in Grand Theft Auto V.

Animals return in Grand Theft Auto V, and they play a much larger role in the game. Dogs are now featured in the game. Lamar owns a Rottweiler named Chop, which Franklin can interact with in various ways, such as taking him for a walk and playing fetch with him. Many dogs can also be seen around the state, sometimes being walked by other NPCs or sitting near their home.

Deer can be seen in Blaine County, usually in the woods or wilderness areas. Boars, pigs, coyotes, cougars, rabbits (Enhanced version only,) chickens and cattle can be found near farms or in rural areas around the state. Snakes appear in fish tanks at the Vanilla Unicorn. Cats can be found in Los Santos and around Sandy Shores in the enhanced version of the game. There is a large variety of birds and avian species in the game. Seagulls, crows, pigeons (Enhanced version only,) eagles, and hawks can be seen flying overhead, and they may occasionally land near the player and peck at the ground.

However, animals like horses or bears were cut from the game.

All animals can be interacted with, albeit in a limited way, but they can all be killed and they react to the player.

The Enhanced version of the game features The Peyote Plant, which can be consumed by the player. When the player consumes one, they will seemingly find themselves in the body of a random animal. The player will be able to move the animal around and, for birds, even fly around the game world using controls similar to those of flying normal fixed-wing aircraft, interacting with pedestrians and other animals. 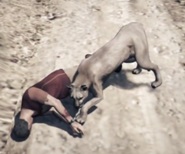 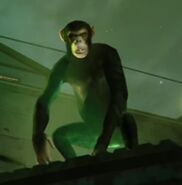 Monkey in the mission Did Somebody Say Yoga?