GTA Myths Wiki
Register
Don't have an account?
Sign In
Advertisement
in: Myths, Myths and Legends in GTA V, Proven Myths,
and 6 more

The All Seeing Eye is a proven phenomenon that occurs at the observatory and is seen in various locations around the State of San Andreas in Grand Theft Auto V.

The All Seeing Eye (or Eye of Providence) is interpreted as representing the Eye of God watching over human kind. The symbol has been used in Freemasonry, Religion, the Illuminati, and the United States Government. The eye in GTA V could be construed as Extraterrestrial Beings watching over us, or it could represent the same meaning as it does in real life. It could also be tied in with the Mount Chiliad Mystery.

There is a tall, slender monument in front of the Galileo Observatory with what appears to be a small globe-shaped object at its tip. During the day, the shadow from the monument is cast onto the concrete sidewalk in front of it. The shadow cast by the small globe at the top of the monument forms the shape of the All-Seeing Eye. This could be a hint at something hidden at the observatory or possibly pointing to another part of the puzzle involving the Mount Chiliad Mystery. The tower is based on the real-life Astronomers Monument, located on the grounds of the Griffith Observatory in Los Angeles, California.

Inside Franklin's House is a framed picture of the All Seeing Eye. The framed photo is one of four known All Seeing Eyes in GTA V. The photo is not referenced in the game's storyline. However, Tanisha does reference the Illuminati in the mission, Lamar Down.

Inside Lester's House is an illuminated All Seeing Eye and a poster of one hanging on the wall. These photos, as well as the other All Seeing Eyes, are seen as clues that make up a strange unsolved secret about Aliens and UFOs in the State, or involving Mount Chiliad Mystery.

The strange map found inside the cable car station has a drawing of the All-Seeing Eye. The eye is etched at the top of the mountain on the drawing. There is also a red All Seeing Eye glyph under the observation deck that has the come back when your story is complete message.

As a part of the Finance and Felony DLC, the online character could own an office to do illegal activities with the help of other players. Warehouses are needed to store illegal merchandise. These warehouses are bought from the in-game internet via a company called SecuroServ. The logo is a red triangle with the all seeing eye on it.

The poster in the background.

The illuminated all seeing eye.

The monument that casts the all seeing eye shadow at the Galileo Observatory.

Omega wearing a shirt with the all seeing eye. 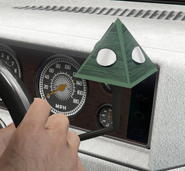