The ghost town appears to be what is left of an ancient tribe, possibly drawing inspirations from ancient Anasazi or Puebloan villages, as Nevada is known to foster.

The town is made up of small clay houses and shacks, but they are all very dilapidated and old. The town appears to have been abandoned for centuries. Aldea Malvada seems to be a tourist attraction because there are signs on the roads leading to it that read "Aldea Malvada: The lost Pueblo." However, no NPCs spawn in the area, and the road leading to it rarely sees vehicles.

There have been many myths that have surfaced in this area. Players have said that this is one of the locations where UFOs can be seen. Ghosts of the lost tribe are also reported to be seen in the area. Players also claim that Skeletons can be found in this village.

The town plays a major role in the mission Misappropriation.

There is a rumor, that skeletons are spawning there and are attacking the player. However, as the myth is false, this rumor is false as well.

Aerial view of the Ghost Town. 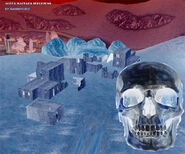