The Abandoned Park, also known as Children's Park, is a small scale park and a mythical location in Grand Theft Auto: Vice City. This park is a mysterious place of interest filled with undisclosed facts.

The Abandoned Park is located in Prawn Island, a known mythical location. The park is also a recognized play area for children. It's plausible that children were supposed to be developed by Rockstar, but these plans were soon canceled. The park features several signs, referencing both children and dogs. One of the posters in the park reads "CAUTION CHILDREN AT PLAY." Another sign mentions a fine for curbing dogs. Numerous players have sighted the Chainsaw Killer in the park, but these claims are a result of modifications. The supposed paranormal Milligan Hotel is also connected to the park. Hellhounds are rumored to guard dark realms in the park due to the reference to beasts, a myth that is false according to a technical perspective.

Another strange fact can be observed from the internal files of the game. The textures of this park are named as Bow_church_dirt_to_grass_cnr_l, which is strange, as no church can be found in the vicinity of the park. However, it is possible that it may be just a technical file name. 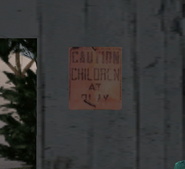 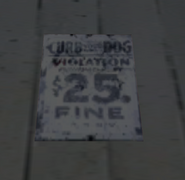